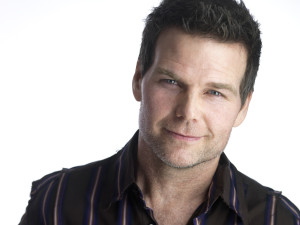 Speaker, performer, author Bo Eason started his career in the NFL, as a top pick for the Houston Oilers. Continuing on with the San Francisco 49’ers, during his 5 year career Bo competed beside and against some of the greatest players of his generation.

In 2001, Bo wrote and performed his one-man play, Runt of the Litter, which opened in New York to rave reviews. The New York Times called it, “One of the most powerful plays in the last decade.” Bo toured with the play in over 50 cities and it is now being adapted as a major motion picture.

In his quest for excellence on the stage, Bo trained with some of the world’s most brilliant performance and movement coaches, Larry Moss and Jean-Louis Rodriguez. Bo now draws from their techniques and wisdom to coach others to be excellent presenters and storytellers.

Bo is dedicated to helping others tap the power of their personal story and become effective, persuasive communicators. He delivered his keynotes and workshops to groups such as Protective Life Insurance, Dimensional Fund Advisors, Morgan Stanley, and Young Presidents Association. Bo has also appeared as a guest on shows like Bill Maher, Fox Sports Net, ESPN, The Rosie O’Donnell Show and CNN.

Topics covered in this episode:

– Bo’s experiences as a child and how he connected with his father and mother.

– How he handled leaving the NFL with a devastating injury.

– His connection to theater at a young age.

– Bo’s thoughts on living without the adrenaline rush that comes from the sport of football.

– Why he moved to New York City.

– Bo was petrified that he was going to hurt someone if he didn’t find an outlet for his dark side.

– Bo’s one tip of story telling: sharing yourself is the most generous act you can do.  It opens up the avenue for people to co-create with you.

– The biggest mistake people make, is not telling their story.

Links from this episode: